There are a great deal of U2 fans on Planet Earth. After all, they are one of the few bands who can go on a World Stadium tour and pretty much sell out every ticket for every show. But for the multitudes of people who support U2, there seem to be just as many U2 haters. Whatever it is, I do not understand why there is all the hate. Sure Bono can get a bit preachy, so what some of their music has hidden political messages, yeah the Spiderman musical was an abomination, and okay The Edge wears a wool hat in 100 degree heat. Put those minor details away and they are still a band who puts out fantastic music and can entertain thousands on end in ways other bands could only dream of.

I saw this tour approximately two years ago at the “old” Giants Stadium. That was also the 360 Tour and I learned something that night, sitting farther back and higher up was actually the best seat in the house. All of the other shows I go to, I do my best to get the closest and best seats in the house. For this concert, I selected my seat very carefully – upper deck, middle of the section, straight on view of the stage – this allowed me to see everything. A U2 360 Tour experience is not only a concert, but it is a spectacle that one can only exeprience to understand.

I unforunately missed the opening act, Interpol, as the traffic along the New Jersey Turnpike is always absurd. But concert-goers that night all had the same reaction upon walking into their sections: a collective “wow”. A giant “claw” draped most of the field making it a stage the likes no one has ever seen. Digital Cameras and Smartphones were clicking away way before Bono even stepped foot on the field. Lines of people waited their turn to take a picture in the aisle with the “claw” behind them. It truly is a sight to behold. 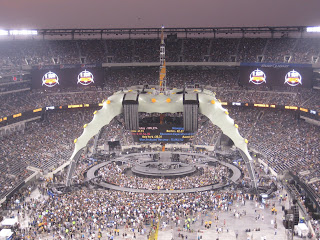 After a bit of a wait, the Stadium lights darkened and the claw started flashing. You could hear David Bowie’s “Space Oddity” song being played and you knew the claw was about to transform into a spaceship. The four members of U2 appeared on the big screen as they walked out of the backstage entrance with Bono taking up the rear. They ripped into an older song “Even Better Than The Real Thing” and the concert was off and running. 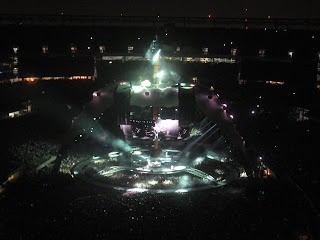 I would be lying if I said the whole concert ran smoothy and perfect. In fact, I sat there scratching my head during the band’s first five songs. Not because the songs were more of the lesser known hits, except “Mysterious Ways”, but because the acoustics in the Stadium were downright awful. The instruments’ volume were turned up way too loud and Bono’s signature voice was hardly audible. The crowd knew every word to “Mysterious Ways” which helped, but the other four songs were hard to listen to. Someone at the New Meadowlands Stadium must have also had my same opinion as things changed for “Get On Your Boots”. All of sudden everything was in sync and Bono’s voice matched up with The Edge’s guitar. For the rest of the evening, the inital disapointment was a distant memory. 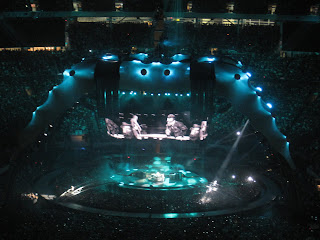 Bono is the ultimate front man. Energetic, preachy, excitable, and strong. He took over the that enormous stage with the grace of seasoned veteran. There were moments, such as during the fourth song “Until The End of the World” that Bono led his bandmates The Edge and Adam Clayton as they all walked around the circular stage. During other songs only Bono and The Edge stood at the forefront as the lights swarmed the Stadium and the two “legends” were shown on the big screen. Bono also stood on moving bridges that connected the main stage to the circular catwalk. He was in constant motion, which played perfectly into the hands of the real star of the show: the claw. 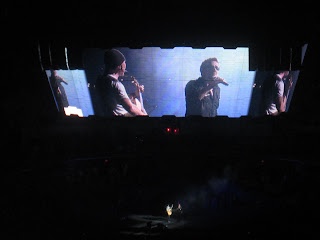 Again, U2 haters are all the same. They hate the preachiness of Bono, despite his preaching is all about helping the people who are less fortunate. Another big knock is that U2 needs to use gimmicks such as the claw. For all those haters out there, I challenge you to come to a U2 Stadium tour and witness the claw, then tell me it is a silly gimmick. It is a incredible beast. Equipped with giant screens that can morph at any minute into different shapes and sizes. It has ever changing lights that really make you think that the stage is a spaceship and it was going to levitate off of the New York Giants’ field. At times, the “Clawed Spaceship” went from green to orange to blue to red in a matter of seconds. It is truly amazing. 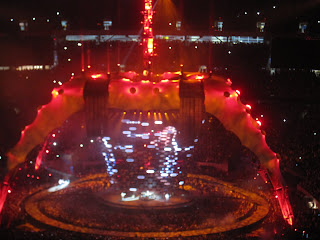 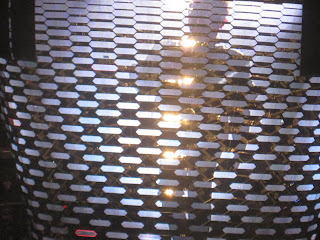 U2 was best on their biggest hits such as “Beautiful Day” and “Sunday Bloody Sunday”. But the one song that really stood out to me was “Magnificent”. Bono’s vocals were at its peak on this song and the stage changed colors rapidly with the fast moving lyrics. That particular song along with the vocals, The Edge’s helicopter style of guitar strumming and the illuminated claw were just that, Magnificent. 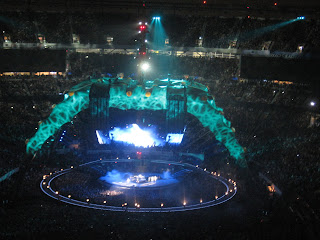 I had heard rumors swirling all week about the possible guest appearances by Jay-Z and Bruce Springsteen, both of which are some of my personal favorites. Jay-Z toured with U2 as an opening act in Australia and they have a remix of “Sunday Bloody Sunday” which gets steady play on my ipod. Bruce is a long time friend of Bono and a native to the swamp lands of New Jersey. In fact, the Jersey crowd showed U2 that Bruce really is the King of NJ as at least four times during the night you could hear chants of “Bruuuuuuuuuuuuuuuuuuuuuuuuuuce”. Bono even sang a snippet of the E Street Band’s song “The Promised Land” and took a sign from the crowd which paid respect to the late member of the band, Clarence Clemons. But alas, no Bruce, no Jay-Z. 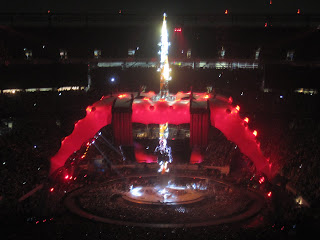 In the end everyone walked away happy and amazed by the stage. The encore was a bit slow and long and most of the crowd bowed out with two or three songs left. I stayed to the end, until the spaceship landed, fully appreciative of U2’s music and eagerness to give their fans more than just a show. 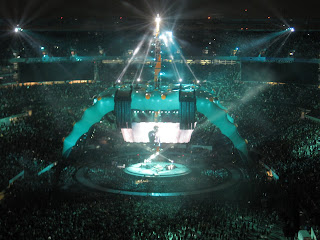